All tour dates, tickets, lineups, competition winners and the rest of the appropriate shenanigans will be announced soon on FINRG Facebook and https://finrg.com

FINRG – The Legacy Tour continues its crusade after Pori to the northern parts of Finland – Oulu, which works as domain of their local group of underground techno bandits and freeform cutthroats: the HUG collective.

FINRG Recordings also has a Discord server for real-time messaging between the label and its audience. In a way it works like the FINRG forums back in the day with different channels for topics like past & new releases, events, shameless self-promotion and such. 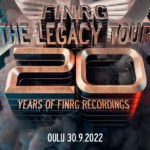