Although having produced music for more than 10 years Alek Száhala is a relatively new name in the international scene. Still he has truely been one of the key players in the recent developement of the new wave of Finnish Hard Dance. He has been voted two times for 4th best artist / producer in Finnish Club Awards (2003 and 2004), both times only few votes after Carbon Based while the first and second prizes went to the mainstream / trance artists.

In the past Epyx & Cyrez had many times tried to produce some tracks together, but they usually never got finished. Now very recently they found a style they`re able to create together. Their style has elements from Cyrez`s style blended with Epyx`s beautiful melodies and progressive beats. With every new track , they are always trying to create some new and weird solutions to make the audience go wild.

Best known for their highly energetic appearances, Carbon Based leaves no one cold when it comes to Live PAs. They have performed in most of Finland’s popular events like Säde, Koneisto, Movement, FINRG Tour and Rush. During the last few years Carbon Based has performed in more than 50 events. Their international debut took place in December 2003 in Elation Christmas Carnage, London. In July 2004 Carbon Based did an Australian mini-tour with appearances in Hard Kandy, Melbourne and on the main arena of the massive Winter Enchanted, Adelaide. In addition to the live PAs, DJ gigs are also done on a regular basis by Ari as E-nrg, Toni as Big Mistake and Teemu as Drumhead.

Infekto (Riku Pentti) has been the broken beats pioneer in Finland since 1994. Co-founder of the first Finnish breakbeat label Pyssy and half of the chart topping hip hop/beats producer duo Skillsters. Skillsters is responsible for producing the first ever finnish hip hop album and was also hired to produce and be a part of the live act of Finlands biggest dance music export Bomfunk Mc’s on their 3rd album. Many Finnish hip hop acts have also hired Infekto’s avantgarde scratching skills and his fierce breaks and drum&bass dj sets have been heard from Tampere (Where his eclectic breakbeat club ”beatformers” is running 7th year!) to New Delhi. 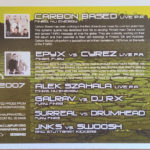