Now being labelled as ”the biggest next generation nutter” in Hard Dance, Alex Kidd is well on his way to Global Domination with his unique, dance floor destroying sets.

He is one of a few UK based DJ’s that supports a European Hard Trance & Hard style sound. But defining his sound is a difficult topic that many have attempted & FAILED to address. When questioned Alex says his style is ”predominantly European Hard Trance, with elements of Hard Dance and Hard Style & a splattering of Techno, just for good measure!” This is all reflected in the wild and outrageous shows that he consistently delivers. His insane technical ability shines through as he battles and chops his way through growling beats and soaring riffs to stand high and mighty over all other’s on the bill, gaining the respect of other artists and amazed crowds the world over.

2004 saw Alex really catapult into the big time, with major bookings at HQ Amsterdam, Inside Out, Dance Academy, Wildchild, Bionic, Polysexual, Sundissential & Garlands, followed by major UK Festival appearances at Creamfields in the Cream/Goodgreef Main Arena, Helter Skelter & Antiworld Indoor Festivals & the 7000 capacity HQXL @ Amsterdam Docklands, culminating in being tipped by Yoji Biomehanika in the 2004 Top 100 DJ Mag Poll as One to watch for the future! & was also cited in both 2004 & 2005 as being a Mixmag Future Hero.

But the talents of Alex Kidd are in no way confined to the DJ Box alone. Alex has been the A&R manager for the hugely successful Goodgreef record label since its beginning, putting him at the forefront of what’s happening now & has mixed all 3 of the Goodgreef Albums, including the 3rd album with Yoji Biomehanika which included a huge UK tour alongside Yoji to help promote the Album.

His close workings with anthem machine Dark by Design are recognised in there legendary back to back sets and their infamous remixes. The studio is an ever increasing part of his daily routine with constant re-edits and intro’s being polished and perfected for his sets, alongside exclusive remixes and collaborations for label giants such as Tracidd Traxx , Detox and Nukleuz.

FINRG Presents FUXX. will be Alex’s first visit in Finland so let’s show him how to rock the fucking roof off! 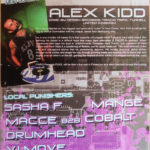