FINRG and Madwave are proud to introduce you A true hard dance legend, Phil Reynolds. He is one of the stars on London’s huge Hard Dance scene. He is resident at Frantic and Convergence, and frequent guest at everywhere from Heaven to Brixton Academy. Phil Reynolds is famous for his unique combination of harder House and Trance, but not just as a DJ, but also as a highly accomplished producer who has co-produced with such as Nick Sentience and Kevin Energy. 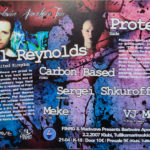