Impulse meets FINRG: The Brutal Side of Hard Dance

FINRG and Impulse are proud to introduce you one of the leading hardcore producers/DJs/MCs of the 90’s and one of the greatest pioneers of freeform: DJ Sharkey.

Sharkey is best known for mixing 8 of the massive Bonkers compilations – the biggest hardcore compilation albums of all time, which have also gained him two Silver Sales Awards in the UK.
Another great success was his track ’Revolutions’. It reached #53 in the UK national charts and for an underground 180 BPM record, this is a huge achievement. Sharkey has also been part of the Nu Energy Collective since it’s been created.

Sharkey has played at every major hardcore club in the UK, but also places like the main dance arena at Glastonbury in 1999, the Kiss FM hardcore shows and the Kiss FM Breakfast show.
His tunes has been played on mighty Radio 1 by the legendary radio dj John Peel, with John Inviting Sharkey to mix on his Essential Mix in 2003. 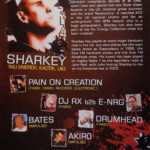